Last of the Summer Honey

The bees have been flat out for the last two or three weeks collecting from the Himalayan Balsam, so I was lucky enough to get another super of honey off last weekend. Not all the frames were completely full and capped and I reckon if I’d left it on another week or two they’d have filled it to the brim but I’m keen to get varroa treatment started which takes four weeks and needs warm weather to be effective.

I ordered a sweet little extractor from Fragile Planet bee supplies. It’s a two frame tangential extractor which you can work using an electric screwdriver to save on turning the handle but I couldn’t get mine to attach so ended up doing it the hard way after all!

Here’s a photo of me uncapping the honey with an uncapping fork – this seemed a much neater way of doing it than with a knife, much less damaging to the drawn wax. Unfortunately, we were a bit over-keen with the spinning and the first two frames we put in fell apart were completely ruined. It did clearly say on the instructions to spin gently at first to avoid the weight of the honey breaking the wax but we didn’t read that until it was too late! 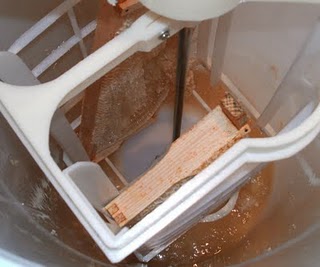 Foundation/comb fallen to bits in the extractor

I managed to extract about ten pounds of honey and put it into smaller jars as I gave it all away so quickly last time! I don’t think it tastes quite as good as my first crop – it’s still a really nice delicate flavoured light coloured honey but doesn’t have such a distinctive floral taste as my first batch.