Activity in the Apiary – John Valentine

Having experienced such a mild December and early January (current date 10 Jan) our bees have been very active and bringing in pollen (some of it from Snowdrops).

Food stores will have been used during this active period and Lilian and John Valentine together with help from John Eustace, Martin Miller and Jane Greenhalgh have been restocking all our colonies with Ambrosia Fodant and also treating them with Oxalic Acid to knock down any remaining Varrao. Colonies treated for Varrao amounted to 72 including the Association colonies and those colonies left on the Beginners apiary. 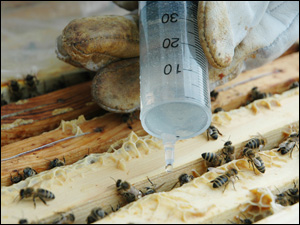 For some of those whose hives were included it was the first occasion they had experienced the winter treatment of Oxalic Acid so it will stand them in good stead for any future treatments. It was evident when treated that most colonies were strong and in some cases there were even 9 or 10 seams of bees. This bodes well for spring and the hope that most will come through the winter, however we have still some weeks to get through before then and at the time of writing colder weather is forecast including severe frosts.

During the next few weeks (subject to weather) it is hoped that the Teaching Apiary can be completely re-fenced with Chestnut fencing. A volunteer working party will be arranged to carry out the work and tidy the apiary for spring. If you wish to volunteer please contact John Valentine, tel 01235 767524.

For those members who know the size of the Teaching apiary, you will wonder how this amount of fencing is being paid for, I can assure you that the apiary is self financing from the sales of honey that was produced at the apiary last year. We do still have a few buckets of Association honey for sale if anyone is interested in purchasing a bucket or two.

During December John Eustace, Ric Hiscott and John Valentine renewed fencing posts and installed a Dutch Gate on the Beginners apiary. Ric spent most of his time on his stomach removing dirt from the hole for a strong gate post which should last for a considerable time and it will now be easier to gain access and move hives on/of site.