In a season that appeared to have been more ‘swarmy’ than usual i have been incredibly lucky in that my bees have not swarmed. The swarmy season may have in part been caused by the warm and dry weather through April and May, which in fact turned out to be better than the summer and started the season with a bang.

My year has been completely focused on increase through queen rearing and so the slightest bit of swarming instinct that my bees have had has been channelled into this fruitful activity leaving all hives with new queens. Ordinarily i am sure by the time we get to mid September bees are not going to swarm. Feeding and varroa treatment are almost complete and only a few weeks to go before we baton down hatches for winter. Or so i thought.

At the apiary today the bees were really busy, with lots of pollen, i expect from ivy being bought into all 3 colonies on this site. In fact they were queuing up to get through the entrance blocks that are reduced to prevent wasps gaining entrance.

I also noticed some bees showing interest in the base of a small tree to the left of the hives. On closer inspection it appeared to be a swarm. I felt it necessary to find out which hive they would have come from and got lucky with the first hive, as it had far fewer bees than the last inspection. Curiosity settled but none the wiser as what to do, I had little equipment or anything that would help gather a swarm. Why now, why on earth have they decided to leave a hive filled with food with barely a few weeks before winter begins to set in, surely this bee suicide?

I returned later with a nuc hive to put the swarm in as i could only guess the bees must have left a new queen in the somewhat emptier hive and it would not be a good idea to try and put them back from where they have come from. The bees were not easy to collect, in fact they were impossible to collect from a tree with a trunk that can only be described as a bunch of large sticks, surround by chicken wire to keep out rabbits and it also being very windy. The few bees that were being brushed out of the tree as this was the only way of getting to them were just being blown away and flying immediately of the sheet to collect them. After about 15 minutes i had collected little more than a few handfuls each time placing them on a board to climb into the nuc. I am pretty sure i have not collected the queen and had to leave them, i guess i have 2 chances, the bees may decide that they would be better off in the original home, move into the nuc or look for something else? 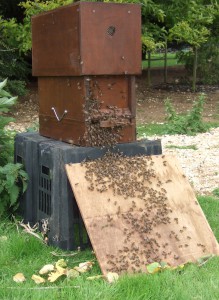