Having noticed one of my hives robbing another, I wondered if perhaps there wasn’t enough forage for them at the moment. But after watching the front of Hive 1 for a while they seem to have given up their life of crime and got back to proper work. Many of the bees were coming back laden with pollen which I tried to identify against the Bristol Beekeepers’ Association pollen chart: 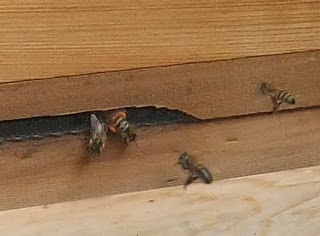 The dark orange could be asparagus or dandelion, the pale yellow honeysuckle and there’s lots of white – especially noticeable was a big white mohican stripe down the back of many of the bees which I found out comes from Himalayan Balsam. Here’s a short video showing the white stripes:

This is a controversial flower – an invasive and aggressive non-native species which crowds out the native plants, then dies down in winter leaving soil susceptible to erosion. It prefers damp conditions and is quite common now on riverbanks. I know there are regular “Balsam Bashing” sessions in Abingdon along the River Ock (which is probably less than 500m from my apiary “as the bee flies.”) However, the bees seem to love it and apparently it makes excellent honey too.

The bees are also all over my lavender at the moment and all the gardens in town are no doubt supplying them with many other garden plants to forage. 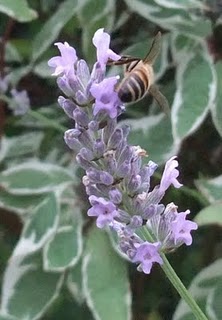 However, having looked at a map to see how far the river was from my apiary, I was surprised to see how close some agricultural land is.  I noticed a bean field near Shippon recently, which is only about a kilometre away.  Bees mostly forage within 1km of their hive but apparently can travel up to 5km.  I live in the centre of Abingdon so always thought of my hives as “urban bees” but they could be flying out as far as Boars Hill, Radley, Culham or Marcham for particularly tasty forage – no doubt next Spring’s oil seed rape will tempt them out of town.