A Sight for Sore Eyes 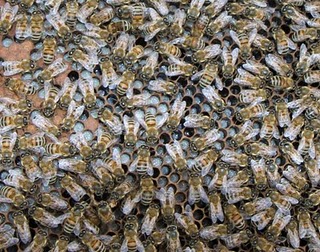 After a month of no brood in Hive 1 I was thrilled to see it chock a block this week with gorgeous, juicy looking larvae and eggs! What a relief. I also spotted the new queen who’s doing a great job and carried on laying as I watched her.

All good too over at Mum’s, after a tricky week dealing with wasps almost overwhelming the nuc. We had a nasty incident with rat glue (a wasp catching tip from a beekeeping forum). However, NEVER use rat glue – it’s horrible stuff and the only thing we caught was a poor little wren.

We inspected the nuc nine days after the virgin queen was released from the queen cage and all seems to be going really well. We spotted her strutting around quite happily and looks like she’s mated OK as there were a few eggs too. 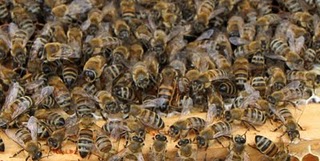 She's a babe! (Queen in the middle of pic)

We transferred the frames from the nuc into a proper hive and also moved it a couple of feet forward to enable better access. It only occurred to me afterwards that it would have been better to have done this in two steps (into new hive, then move it a few days later). Quite a few bees were hovering over the old site seeming confused but Mum said they were happily flying in and out a couple of hours later.

My swarm (Hive 2) seems to be dwindling out of existence. As the queen seems to have disappeared maybe she swarmed again soon after I got them taking half the bees? I reckon I’ll take them over to Mum’s and combine them with the nuc. Hopefully I’ll get this done in the next few days as I need to crack on with varroa treatment next week.