The Virgin Queen and The Robbers

With still no sign of a queen, eggs or any brood (bar the odd drone) last Sunday my original hive (Hive 1) was not looking good. Fortunately Michael from the Vale and Downland Beekeepers’ Association also lives in Abingdon and kindly offered to give me a “test frame” of brood. The idea of this is that if my hive is really queenless they’ll make a queen cell on this frame. Having checked them today, a week later, there was no sign of any queen cells being drawn which means there must be a queen there somewhere AND I was pretty excited to see eggs! At least I hope it was eggs – it was really sunny and very hard to see into the well-polished cells. I tried to take photos to enlarge to double check but its still not clear. 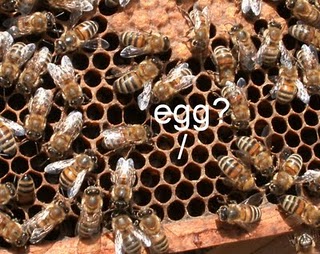 eggs on the test frame?!

Not only did Michael step in to save the day with my hive, I also had a phone call on Tuesday from the Association Chairman, Lilian who offered me a virgin queen – she’d found five that morning. As I already had the test frame in I wasn’t sure what to do but Lilian suggested taking out two frames of bees and setting them up in a nuc box with the new virgin queen. I took the nuc over to my mums to prevent them drifting back into my hive. The bees were roaring, obviously already missing having a queen. I put the queen into the nuc protected in a cage stuffed with fondant which takes a couple of days to chew through, by which time the bees will be accustomed to her smell and more likely to accept her. I checked after two days and the cage was empty and the bees seemed much calmer. I closed them up and will leave them for a week before checking again – hopefully they haven’t bumped her off. 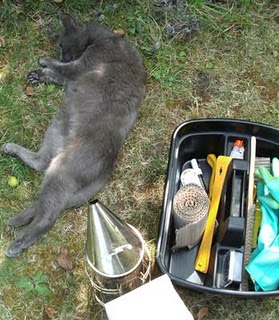 Back at home my poor pathetic little swarm (Hive 2) is still struggling. I gave them 4 pints of syrup last weekend and found that it was empty midweek. Stupidly, against all advice I decided to be really careful and refill it in the afternoon (should ideally be done after they’ve stopped flying to prevent exciting robber bees/wasps). A bit later I noticed a lot of activity around the hive – great gangs of bees bunching up around the front and many others bobbing around and diving in. After watching for a few minutes it was pretty obvious that a lot of bees were coming out of Hive 2 and darting back the very short distance to Hive 1 with their booty! The lazy devils were robbing Hive 2 blind. No wonder they’ve been filling up another super – no doubt with sugar syrup rather than proper honey! After a quick bit of research on the internet the quickest/easiest suggestion I found was to cover the robbed hive with a wet sheet which confuses the robbers, making them give up after a couple of days. Lets hope so; as if this wasn’t bad enough I also noticed ants running up the side (put some ash down around the stand to deter this) AND found a wax moth in the hive during inspection. 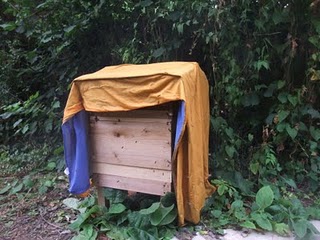 This week I also finished mosaicing my second stepping stone for the apiary – a swallow this time. It’s supposed to look like a tattoo swallow (to match the first one I did – a sugar skull). Anyway, I’m pretty pleased with it and I’m now working on a bee drinking dish with lots of raised pebbles etc for the bees to stand on in the water. 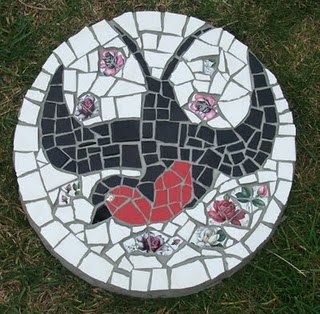