Honey And A Swarm!

I got up this morning and just couldn’t wait any longer.  I went down the bees and stole one fat frame from the super – I just had to have some honey for my breakfast!  It was amazing – absolutely the most delicious, fragrant honey I’ve ever tasted (I bet every beekeeper says that).   Very pale in colour; the taste reminded me of elderflowers.  Here’s a picture of the frame before I tucked in:

A frame of sealed honey!

I filled two half-pound jars and my cute honeypot which I bought from the bootsale last week! 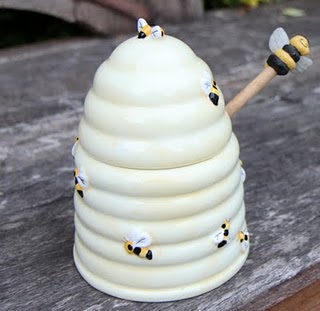 As if that wasn’t enough excitement, I looked out of the kitchen window at lunchtime to see a cloud of bees in the garden.  I immediately assumed taking the frame of honey was the last straw and they’d decided to swarm.  I got my protective suit on as quickly as possible and rushed out to watch where they went.  After a bit of swirling around the garden they settled on a very high branch in Janet-next-door’s apple tree (very fortunate as neighbours the other side had their grandchildren visiting – I could hear them in the garden.   Doubly fortunate because Janet is away on holiday.)   I lit my smoker and had a quick look in my hive – absolutely chockablock with bees; so the swarm was almost certainly not mine – looked like I was about to gain another colony!
My next move was to phone John and Lilian – leaders of the local beekeeping association for advice.  John said that bees do attract other bees and if any were swarming in the vicinity then they would be attracted by the smells of beeswax and honey from my hive.  He talked me through what to do to catch them – I already had a fair idea from the BBKA course I attended last year, and had been lucky enough to be present when a swarm was “walked up” into a hive last summer at the association apiary so decided to give it a go (or, should I say, tell my husband Ian what to do and let him give it a go!)

Here he is going up a ridiculously tall ladder in the apple tree.  The swarm was about the size of a football – not huge so not sure if it’s a prime swarm: 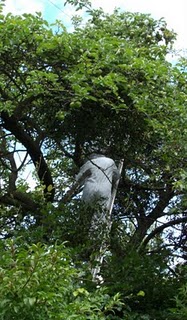 Ian in the tree

Here he is shaking the bees into a cardboard box: 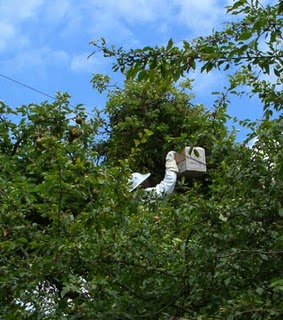 And here he is taking all the credit: 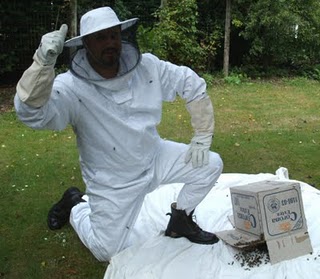 As my spare hive was just a few metres away over the fence, I decided to wrap the bees up immediately and take them straight away next door to hive them. Rather than shake them straight in I thought it would be nice to let them walk in up a ramp to the hive.  It took a bit of shoveling, but they got the idea eventually and trooped into the hive. 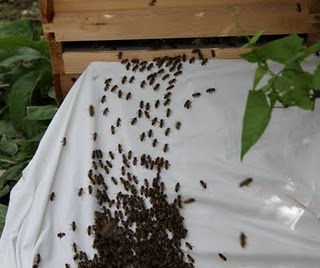 Throughout the whole operation the bees were very good tempered (as were my original colony just a few feet away).  Ollie and Gus were on hand taking photos/holding ladders etc. throughout without any protective clothing and no-one was stung.  How smug do I look in this photo?! I just hope the bees like their new home and decide to stay. 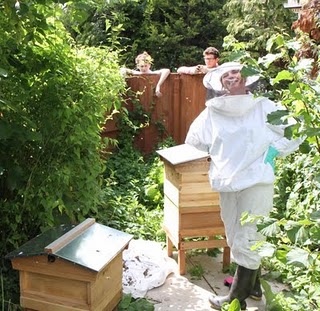