I’ve been keeping an eye on the swarm, which seems to have settled in OK and taking plenty of syrup. But there’s not been much general activity to be seen, unlike my original colony which is always very busy “front of house”. Nine days after I collected them I took a look and was pretty disappointed to see how few bees there were – almost certainly not as many as we collected in the swarm. 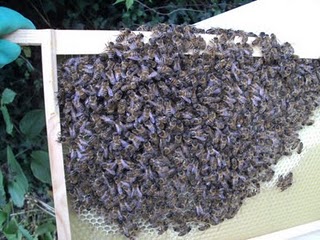 They have begun to draw out just three frames, with no sign of any brood yet but I was very pleased to see a nice big queen. I now wonder if perhaps they did swarm from my hive and some have now drifted back. I gave them more syrup and hopefully she’ll start to lay and build up the colony in time for winter – if not I reckon I’ll have to unite them with my original colony.

In my original hive all is not well either! For the second week I didn’t see the queen and hardly any brood either – no eggs, no open larvae; just a sprinkling of sealed brood. This suggests there’s no queen which, as I knocked out all the queen cells I found last week, is a bit of a disaster. There were a couple of tiny play cups but both were eggless. It is possible that there’s a newly mated queen in there which I failed to find (which if my suspicions that the swarm was from this colony could be the case). If that’s so she probably isn’t laying yet. The colony was particularly quiet and docile today – I understand that a queenless colony is usually bad tempered, so that’s a good sign. At least there is a queen in with the swarm which gives me some options; I can unite them with the original colony or, assuming she starts laying soon, “borrow” a frame of brood to produce a new queen.

I was also worried to notice one or two bees with ragged wings: 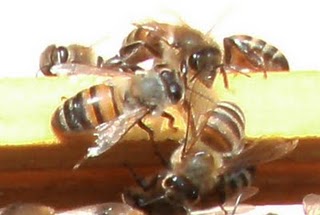 I’ve never noticed this before and have heard that Varroa mites can cause “Deformed Wing Virus”. I googled this however, and it looks quite different – the wings really do look deformed and withered rather than just ragged. It seems that some old bees get ragged tips to the end of their wings – just wear and tear I guess. Hopefully that’s all it is!

Well the good news is that the honey in the super is looking great; mostly capped and ready for harvesting so I’ve booked the Association’s extractor for Thursday!! Very excited for this – bought a big bucket, bought a big sieve, ordered a few nice jars and asked my mum to come over and help. What could possibly go wrong? Hopefully won’t be too sticky to take photos so I’ll let you know!