A surprise at the apiary today…

The weather has been pretty good this week and allowed the bees to make the most of the lime trees that are grown across the estate. The chestnuts have just come into flower this week and so this combined with the field beens means there is plenty of nectar around, at least for the next week or so.

The queen rearing has provided me with less colonies than i had hoped, however they are all doing well, the new colonies all have 5 or 6 frames of brood, with a really good laying pattern and plenty of stores. The strongest of these new colonies is in a double brood box with the bees already and up into the super.

Unusually i had not required any of these spare parts in the other hives, so after checking through the colonies i decided to see what all the fuss was about in the corner as the activity had not lessened.

I took off the two spare roof’s and for some reason felt the need for caution when lifting of the floor that was on top of an empty super. It felt heavy as i levered it up with the hive tool, to find a large cluster of bees clinging to the bottom of the floor. I had to grab my camera and think what to do. 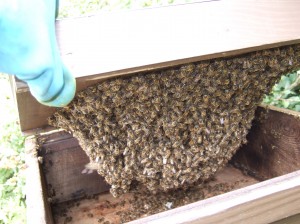 I have never seen a swarm of bees before let alone handled one. I suppose this was not strictly a swarm. None the less, it was not a colony all neatly tucked up between 11 frames in a box 18 inches square.

My approach required little thought, put it in a brood box and hope for the best. Lifting of the floor, super and crown board below, i placed it on an upturned roof. This gave me access to the two brood boxes below that has drawn comb and some frames with foundation. In these boxes i also found the new residents had filed 3 frames with nectar and began to draw the foundation on the frames on the opposing sides. I lifted these frames into a single brood box and placed it onto another floor. Into this i shook the bees that were clinging to the underside of the other floor and then filled the brood box with frames. On top a queen excluder, super (to give them the enough space if they need it) and a crown board completed the bees new home. There were three pieces of freshly drawn comb stuck to the floor where the bees were clustered, this was full with nectar and pollen, i laid these on the crown board to allow the bees to clean these up and placed the other spare hive parts on top.

Hopefully they will settle in nicely to their re arranged home, after all it does have a great view and good neighbours.