I had a great weekend – Friday in Guernsey, Saturday on the island of Sark where we stayed at the newly refurbished and very smart Stocks Hotel where we had pretty much the most amazing bathroom I’ve ever had the pleasure of!

Chatting to some Guernsey friends I found out that they’re at the same stage in their beekeeping career as me – just done a course with their local association and now waiting to get their first colony. Apparently in Guernsey it’s illegal to import bees so it’s a case of being on a waiting list for a swarm to come up. I got the impression that things are a lot more laid back there, perhaps with no money changing hands they have a bit more of an “easy come easy go” attitude, unlike here where swarm prevention is very much at the top of the agenda; not only to avoid being a nuisance but also to avoid losing the cost of buying your colony/nucleus and the honey crop that they would have provided.

Anyway, as soon as I got back from a hair raisingly windy flight from Guernsey to Southampton I rushed home to pick up my nucleus of bees which had finally arrived at the Vale and Downland Beekeeper’s Association Teaching Apiary in Ardington. I took Son No. 2’s girlfriend, Jessica, with me for moral support (and more importantly, to hold the flimsy foam bung in place preventing 10,000 bees filling up the car on the way home!)

The amazingly hardworking couple who are the Association’s President and Chairman (as well as many other official titles/roles) John and Lilian Valentine were there to hand over the nuc’s. It was 7.30pm – we had to leave it till this time as the bees couldn’t be moved until they’d stopped flying – and quite windy and chilly so Lilian advised me not to transfer them into their hive until the next day so Jess and I put the nuc box onto the hive stand in the garden and having unplugged the bung, let them settle until after I finished work on Monday. 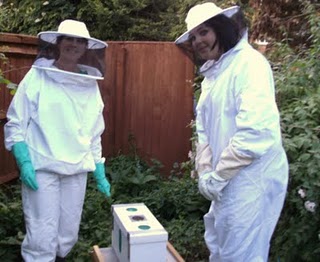